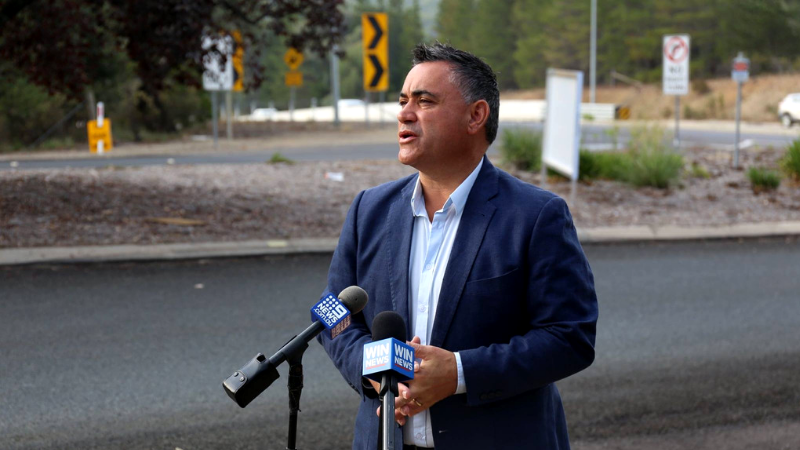 In December 2017, Deputy Premier John Barilaro courted controversy by famously calling on then-Prime Minister Malcolm Turnbull to give Australians an early Christmas present and resign. A menagerie of heavy-hitting Federal Government politicians came out swinging in defence of Mr Turnbull. Many of the same Ministers were eventually involved in asking the PM to step down.

That's part of what sets Barilaro apart from many other political leaders - he's a pragmatist and a political scrapper who takes note of the mood of the electorate, fashioning his plans and policies accordingly. It's also what helped him win back his marginal seat of Monaro at the March 23 election with an increased majority.

The son of Italian immigrants, Barilaro was born in Queanbeyan on the outskirts of Canberra. After leaving school he worked on the factory floor of the family business and eventually managed the operation for around 20 years. With a strong commitment to his local community and a keen sportsman, in 2000 he co-founded the Monaro Panthers Football Club and served as president of the club for eight years.

Barilaro cut his political teeth as an Independent Councillor on Queanbeyan City Council in 2008, although most believed his heart lay with the Nationals. In 2011, he ran for the seat of Monaro on the Nationals ticket and defeated Labor's Steve Whan with an 8.3 percent swing toward the Nats.

After Mike Baird replaced Barry O'Farrell as Premier in 2014 and Nationals Leader Andrew Stoner resigned soon after, Barilaro was appointed as the Minister for Small Business and Minister for Regional Tourism, remaining in a similar role following the Coalition's 2015 election victory.

Barilaro had his moment when 'the greyhounds' debacle claimed the scalp of Nationals Leader and then-Deputy Premier Troy Grant, resulting in Barilaro being elected unopposed as Deputy Premier by his colleagues.

As Minister responsible for the resources sector and for regional NSW, Barilaro has pulled no punches. He's campaigned hard for nuclear power to be considered as part of the NSW energy mix and for new dams to secure water for regional NSW despite opposition.

Barilaro has proved as formidable on his feet on the floor of NSW Parliament as he is comfortable sharing a beer with farmers and small business owners in regional NSW. Whatever happens on the other side of the Coalition, he will likely remain Deputy Premier and Leader of the Nationals heading into the 2023 election.