ScoMo's Newest Staffer: One of the Most Tactical Roles in the Office 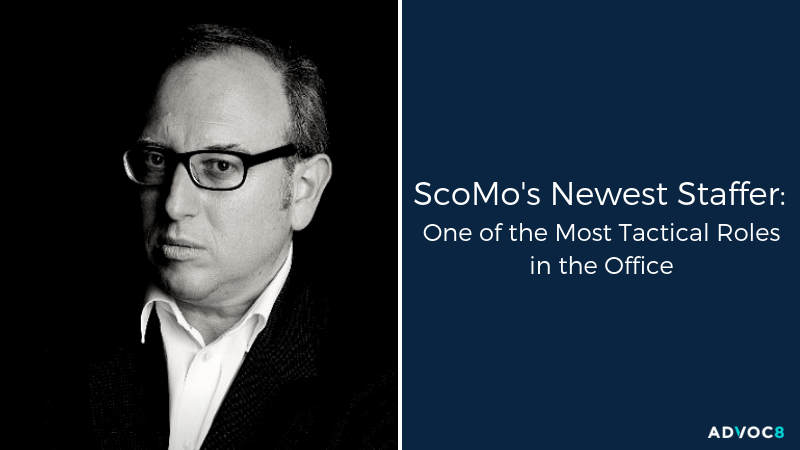 If the strength of any leader is measured by the calibre of people chosen as advisers, newly minted Prime Minister Scott Morrison is on the right track.

Having recruited policy dynamo, Dr John Kunkel as Chief of Staff not long before taking on the top job, the Prime Minister has added another political panzer to his administration.

Yaron Finkelstein joins the Prime Minister's Office (PMO) as Principal Private Secretary, one of the closest positions to '˜the Boss' and one of the most important roles in the PMO.

The Principal Private Secretary is a traditional term and may suggest a glorified diary manager. The reality is the role is highly tactical, working closely with the Prime Minister to ensure everything he does and says serves the Government's overall strategy. It also involves working closely with members of the Cabinet and backbench to ensure they're consistently 'on message'.

An avid practitioner of the edict that political operatives should be rarely seen and never heard, Finkelstein has flown under the radar in politics for some time. This, however, has not impeded him in becoming one of the top campaign operatives in the country.

Finkelstein cut his political teeth as an adviser in the Howard Government working for the Minister for Education, Dr David Kemp, staying on in the portfolio when Dr Brendan Nelson assumed the role in 2001.

Not long before the defeat of the Howard Government, Finkelstein moved on from staffing to join the powerhouse strategic campaigning company, Crosby Textor.

First lumped in with the melting pot of Canberra lobbyists, Crosby Textor soon differentiated itself by focusing on providing strategic campaign guidance and detailed, '˜best-practice' polling. By the time Finkelstein joined the company, Crosby Textor was running campaigns in the UK, Europe and even Africa.

With the retirement of Mark Textor and Sir Lynton Crosby basing himself in the UK, Finkelstein became the go-to-guy at Crosby Textor for leading Australian businesses, industry groups and political parties seeking a centre-right take on campaign strategy, as well as the matter-of-fact truth on any given issue through qualitative polling and analysis.

In 2015, Finkelstein was made the CEO of Crosby Textor in Australia and many suspected would carry on as a senior international executive with the firm until the recent surprise announcement that he was joining the PMO.

Finkelstein's almost unrivalled strategic campaigning experience and understanding of the need to '˜tell a story' about one's opponents is precisely what the Prime Minister will need if he has any chance of taking the fight to a buoyant Labor Party at the Federal Election.

The real question is whether the combination of Finkelstein and Kunkel will be enough to deliver a vision that ignites the Coalition's base '“ small business, self-funded retirees and families with dependents '“ through bold policies that offer hope for the future rather than timid tinkering at the edges.