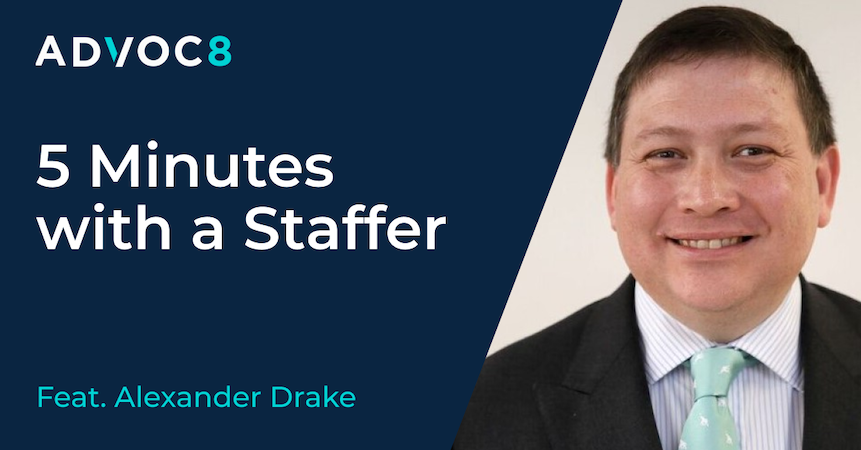 He started out as an electorate officer with Senator David McGibbon in the first term of the Howard Government in 1997. Since then, this seasoned adviser has worked as a federal ministerial adviser in Canberra, as a state Ministerial adviser in SA and NSW, and in the Conservative Research Department at Westminster in the UK.

Alexander Drake now heads up Government and Industry Affairs at Genworth Australia, and joins us to chat all things government relations, and why good data is the key to success.

Thanks for speaking with us Alexander! Tell us, how did you find yourself working as a staffer in the late 90s?

By accident! I was approached about a temporary role with a federal politician in the lead up to some university holidays. It sounded interesting so I accepted the approach, and found I enjoyed pursuing it as a career path.

I think the opportunity to make a positive opportunity within other people's lives. When politicos use language like that it sometimes sounds trite but I think most people go into that line of work really believing that perusing good public policy can make a difference to the lives we all lead.

When you were out there speaking with stakeholders and interest groups, were there any who were particularly effective at engaging your office?

Stakeholders who come and see policy makers are at their best and most effective when they come prepared. When they aren't just looking for a handout, but they are coming with productive, practical policy solutions, supported by impactful data. We are in an age of evidence based policy decision making and if you can bring real insights from the data your business has, your case is that much stronger.

And keep turning up! The thing I've noticed in Canberra over the past 20 years is that the fight you have to make to keep your share of voice or to build your share of voice is growing because there are so many people down there. You used to be able to walk around parliament house and if you knew a back bencher you could stick your neck in and have a cup of tea, often unannounced and they would often have time to see you. Today, not only do they have more to do themselves but there are more people seeking to do that. So if you do have face-time with policy makers, whether they be electorate representatives or departmental officials you have to make that time count, it's different.

What are some of the challenges you faced when you tried to find policy middle ground between opposing groups and opinions?

Well, good policy making isn't about keeping everybody happy. I like to think we still had politicians who sought election on the basis of a manifesto or policy programme, and that their objective was to implement those policies if elected. So, I think it's wrong to think about policy development as simply something to placate special interest groups, although I agree there is a need for talking to different sets of stakeholders and working with them on their issues.

I think when it comes to finding solutions, the process I mentioned before works best - when stakeholders come armed with plausible, workable solutions underpinned by good data.

It's a surprisingly common mistake - turning up and expecting the policy maker to conjure a solution!

And that becomes less likely when you yourself have not worked out what your objectives are. I'm amazed by how many people, having won that precious time with a policy maker, haven't already done that spade work themselves.

What kind of data and evidence did you find most compelling when you were a staffer?

You are always ahead when you provide data that nobody else has. If you get insights that nobody else can see, and give it to the department before they start writing a briefing note for that Ministerial meeting, that's very powerful. Ministers can draw on their departments and officials for advice, and if your data is not only incorporated into that advice but reinforces the government's manifesto, you're in pole position to get cut through.

Is there anything government relations professionals shouldn't do when they meet with a staffer or their Minister?

They should never be late or unorganised, they never appear as if you don't know their topic and should never not follow up.