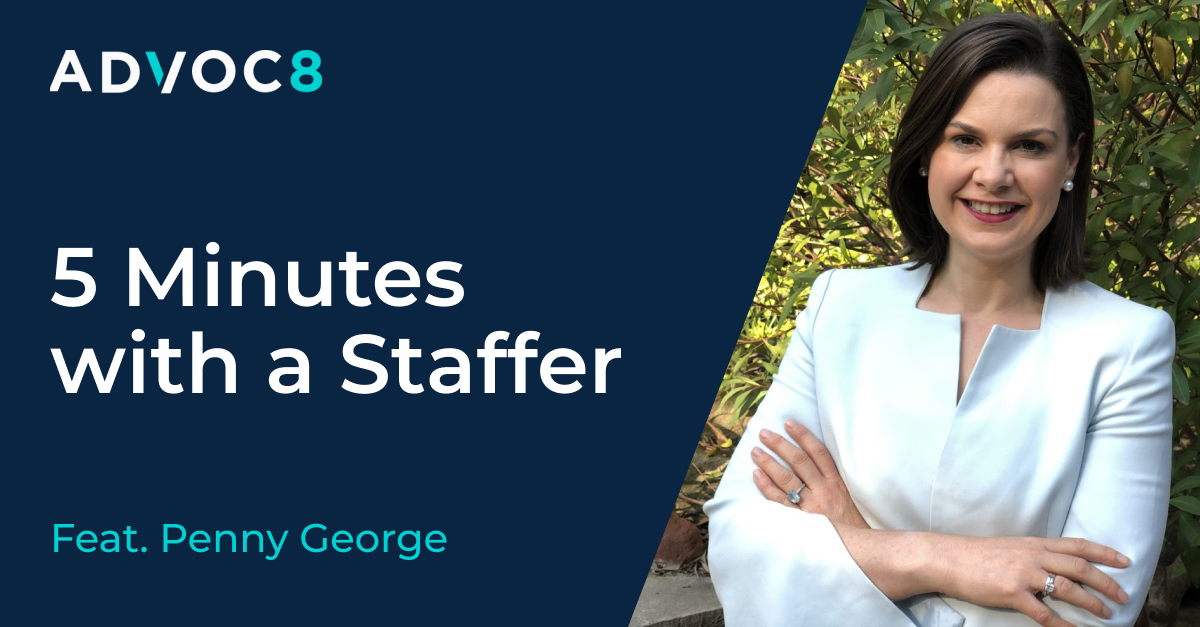 Penny George has experience most of us politics tragics would envy - she has sat on local council, was a ministerial staffer, and coordinated election campaigns.

Now the Head of Public Affairs for Australia and New Zealand at Sanofi, Penny is responsible for planning and delivering government relations and advocacy strategies, and leads a top performing team.

We’re thrilled to speak with Penny about her experience as a staffer, and how she’s applied her learnings there to her current role.

Thank you for speaking with us Penny! You’ve clearly had a very accomplished career in politics, staffing and corporate government relations. What made you enter politics in the first place?

I think a big influence was –being brought up by a single parent.  I've always observed the environment around me. I appreciated the good times when my mum had a job, and the hard times when we were on welfare, so I understood the intersection of family and government policy from early on.

When I was 18, I wanted to represent young people in the Southern Highlands so I ran for and was elected to local council, and joined the Liberal Party after that. That really crystallised where my decision-making lay (small government, rights of the individual and surplus budgets) before I started working for Pru Goward as the Member for Goulburn and later NSW Minister for Family and Community Services, and Minister for Women.

‍Was the personality and her vision the appeal of working as a staffer for Pru, or was it the desire to be involved in the decision-making process?‍

It was both. It was about service to the community, and my desire to help Pru in that service. To be involved and stand up for what you believe in, to look at the facts and then decide what is the best course of action, is something that always underpins my approach.

I was also just incredibly lucky that my stars aligned - Pru was the Sex Discrimination Commissioner when I was in high school and was someone I looked up to. I was lucky that she became my local MP, and as a young female councillor, we clicked. ‍

Were there any guiding principles you followed when you were a staffer to Pru?‍

Everything we did involved respectful debate, and the sense of trust and deep respect between Pru and her advisers enabled that. It also made it easier for us to challenge the department when in government and remind us who we were there to serve and represent.

I also always emphasised the need for respect of taxpayer money. I recall being in a meeting when a departmental person said that they only spent $30,000 on a project. Pru pointed out that’s someone’s stamp duty. When you’ve worked in local council like I have, and you've been at the coalface, you appreciate that even $500 in rates fees is a lot of money for some people. You can’t forget that when making decisions in government. This is something which also has stayed with me while advocating in my current role.

‍You’d have met with various organisations and groups in local council and working for Pru. What’s your advice for effectively engaging with and delivering messages to political stakeholders?

Ultimately you have to know and understand the priorities and strategic business direction of the organisation which you are working in, as well as being really clear on your reasons for representing the company. As Sanofi is a medicines and vaccines company, I find this connection very easy to make.

This clear direction provides a clear engagement with political stakeholder engagement. In particular a focus on “what's in it for them” or “why they should care”? Whether you’re talking to a local MP, Committee Chair, or the backbench - be clear on what the impact to their electorate is. Know their electorate interests, what they’ve been working on, and what they’ve been saying on topics of interest to you.