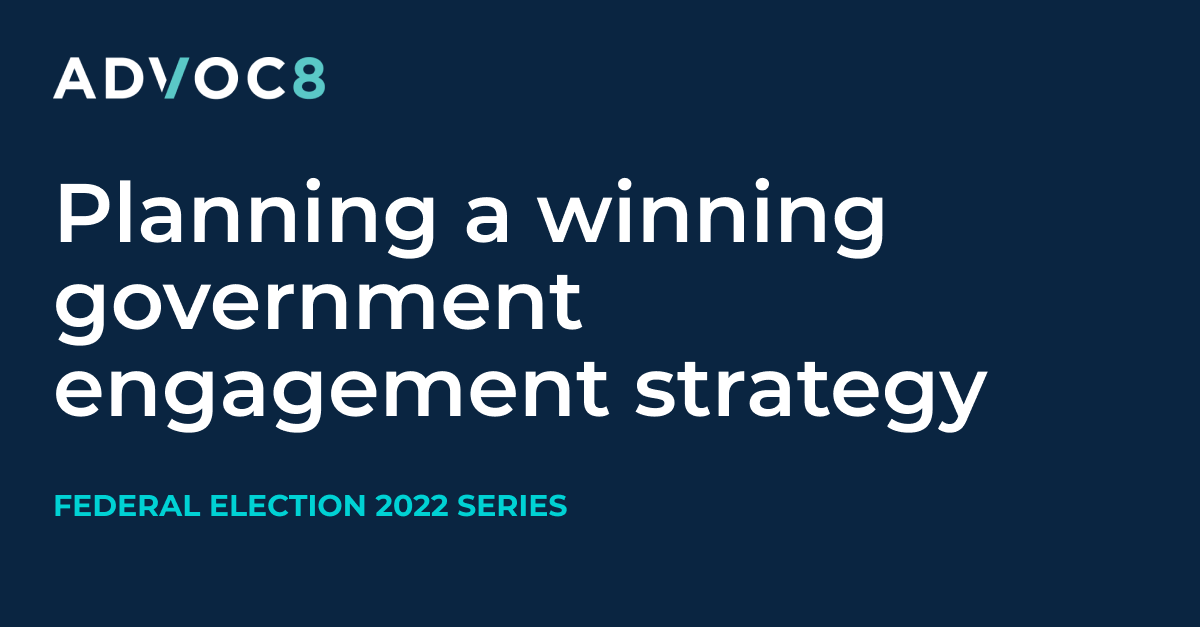 Earlier this month the Prime Minister hit the road to get a haircut, make gnocchi, and announce big energy policies. If you didn't catch the whiff of an election then, yesterday the Government named March 29 as the Federal Budget date, and released a Parliamentary sitting calendar that sends the strongest signal Australians will be going to the polls in early May.

Over the next 6 months, MPs will become increasingly campaign-focused and major parties will start dropping election commitments like hot chips. Meanwhile public servants will be entering caretaker mode, and will likely become more available and responsive to outreach.

Gaining access to politicians and key decision-makers during an election year requires a government engagement strategy that acknowledges its not business as usual for your stakeholders, especially in 2022.

To help you get ready, Advoc8 is launching the FedPoll 2022 Federal Election Series, a collection of content and events to get you skilled up and tooled up for an election in unconventional times.

This blog is the first of a two-part series. Subscribe to get Part 2 on implementing your strategy straight to your inbox.

Are there specific initiatives, projects or policies you want the government to fund or support? How do these relate to the broader goals of the organisation? It's a good idea to find time with your senior leadership team (SLT) or other leaders to align on what's actually important to the organisation, and link your campaign objectives directly to that. This will make it easier to articulate your ask to external stakeholders, and later, help internal stakeholders understand how your efforts have positively impacted the business.

Step 2: Articulate your goals and KPIs

What's your goal? Once you are clear on the objective, you can set incremental targets that will get you one step closer to meeting it. For example, if it's more favourable coverage or discussion about an issue or your organisation, you can set a metric around positive media mentions.

Alternatively, if it's simply to raise awareness, it may be a goal of having a certain number of positive meetings with target stakeholders (mindful that in the current climate you'll want to be engaging both sides of the political divide).

Ruthlessly identify your priority stakeholders. Government and Opposition MPs are starting to clear the decks of anything non-election critical, and as mentioned earlier, what is and isn't 'critical' will depend on the MP.

The saying all 'politics is local' is even more true for elections. Scan Hansard, socials and media releases to find relevant election promises and MPs' priorities (or use Advoc8 to monitor these sources and set up alerts in the one place). You can also identify stakeholders based on geography and whether your organisation has a presence in their electorate (which Advoc8 can help with as well).

And don't forget about reaching out to candidates as they are often actively looking for allies and opportunities to connect with voters. Even if they don't get up, you'll often see them reappear in the future as advisers, MPs and Ministers.