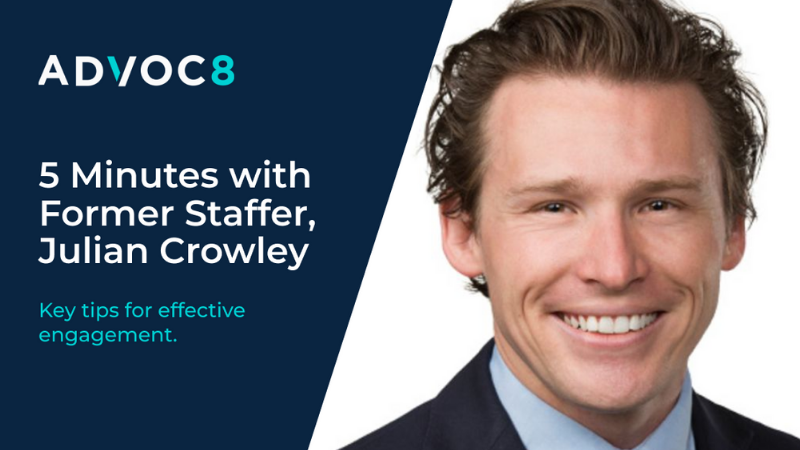 Julian Crowley worked as a Senior Adviser in the NSW Government across a range of Ministerial portfolios between 2013 - 2016 before taking up a consultant role at EY. He now works as Policy & Corporate Communications - News Lead for the Asia-Pacific at Airbnb.

We talked to Julian to find out what it was like working as a political staffer, and gain some key insight on what advocates can do to form strong relationships and get their message across.

Julian thanks for taking the time to chat with us. Let's start with who you worked for in politics and what your role was?

I was a Senior Adviser to a number of Ministers in the NSW Government.

And how and why did you become a staffer?

An opportunity came up in the then-Sports Minister's office to combine my love of sport with my interest in politics.

What did a day in your shoes look like?

I would be up early to read the papers and get across the issues of the day. After that it would largely depend on what was happening. It could involve anything and everything from meetings to press conferences to getting out into the field. Without question, the best but hardest days were when Parliament was sitting.

What are some of the effective things advocates can do to help deliver their key message to a political office?

A good starting point is really understanding the problem they are trying to solve. At the end of the day, your message is only going to be effective if your solution is as well.

What were some of your biggest challenges when formulating policies and incorporating various groups' feedback? What can advocates do to assist this process?

I found the best advocates were those who not only understood the problem, but had potential solutions in mind. It's clichÃ© but true that governments - and particularly staffers - don't have a monopoly on good ideas. I think there's a role for business to play in putting forward what 'good' looks like.

What are some of the most common pitfalls for advocates in meeting with MPs and staffers?

Again, I come back to not having an understanding of what government wants to achieve. Governments have a mandate to deliver a certain agenda and advocates need to show how what they are proposing relates to it.

Of the organisations and stakeholders that you found helpful or effective, what made them so great to work with?

For better or worse, politics seems to be moving at a faster pace. It makes the ability to pick up the phone and have frank, honest talks with a stakeholder so much more valuable.